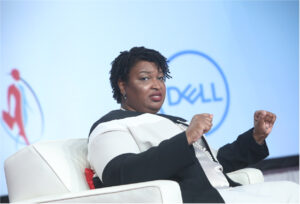 Georgia Democratic gubernatorial candidate Stacey Abrams has embraced sports gambling as she trails Gov. Brian Kemp in the polls with two months left before the election.

NBC News reports that policy watchers believe the move by Abrams indicates yet another difference between her and Kemp. The Fair Fight founder’s campaign has released a series of 15- and 30-second advertisements running during college football games focusing on her support for sports betting in Georgia while bashing Kemp for his opposition to sports betting in the state.

Abrams’ campaign spokesperson, Alex Floyd, told NBC News the “latest ads on sports betting are meant to draw attention to what Georgians already know: Gaming is happening in our state, but right now we are missing out on millions in revenue that could fund expanded access to higher education.”

Another round of advertisements is on the way. Kemp has opposed sports betting since a Supreme Court decision made it legal for states in 2018. In his opposition, Kemp has said the decision to legalize sports betting is not up to him.

“This is the thing about my position on that: it hasn’t changed,” Kemp told reporters at the state Capitol in August, according to WABE. “I’m at the same place I’ve always have [been]. To be able to do that here, it’s gonna take a constitutional amendment. It doesn’t really matter what the governor thinks, you can’t veto a constitutional amendment.”

The ads come after Abrams gave a speech last month outlining her broad economic agenda. In the speech, Abrams said she supports a state constitutional amendment legalizing sports and casino gambling. The proceeds will fund educational initiatives such as universal access to technical colleges and need-based financial aid for higher education.

At least 31 states have legalized sports betting since the 2018 High Court decision, including New York, New Jersey, and Connecticut, which legalized it in 2017 but officially went live last fall. Polling in the Peach State shows widespread support for sports betting. A January 2020 survey by the Atlanta Journal-Constitution showed…