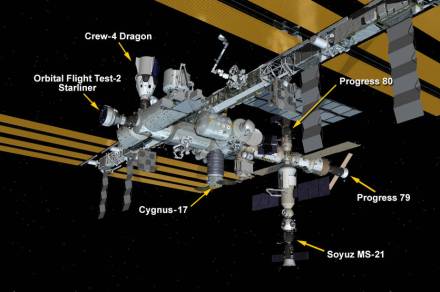 Boeing’s new spacecraft for carrying astronauts arrived at the International Space Station (ISS) on Friday night, as part of its uncrewed orbital test flight. The hatch between the Starliner and the ISS was opened at 12:04 p.m. ET Saturday, May 21, allowing astronauts to pass into the craft and access the 800 pounds of cargo and crew supplies inside.

Inside the Starliner craft is an “anthropometric test device” in the commander’s seat: A dummy known as Rosie the Rocketeer. Rosie collects data on conditions inside the capsule during its mission and was inspired by the famous Rosie the Riveter from World War II posters. Weighing 180 pounds, she represents the 50th percentile of human height and weight, according to Boeing, and helps to maintain Starliner’s center of gravity during the test flight.

Rosie previously flew on the first orbital test flight of the Starliner in 2019 which failed to reach the space station. Despite the problems during this first test flight, Rosie provided data on what astronauts can expect to experience when flying in a Starliner.

To celebrate the arrival of the new craft, the current crew of the ISS, which numbers seven, came together for a welcome ceremony at the hatch:

The seven-member Exp 67 crew gathers for a welcome ceremony in front of the hatch where the @BoeingSpace #Starliner docked on Friday evening. pic.twitter.com/AGfkAjWMbI

The docking of the Starliner also means that the space station is hosting an unusually wide variety of spacecraft. There are currently six craft docked with the ISS, of five different types.

As well as the Boeing Starliner, there is the SpaceX Crew Dragon craft called Freedom which carried the four Crew-4 astronauts from NASA and the European Space Agency to the station last month. Another crew ship is the Russian Soyuz MS-21 craft which arrived at the station in March carrying three Russian cosmonauts.