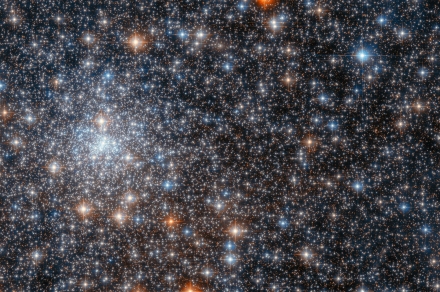 Stars sparkle in various colors in this week’s Hubble image

Close out your week with a soothing view of the wonders of space, as provided by the Hubble Space Telescope. This week’s image from Hubble shows an enormous structure of stars called a globular cluster, located 23,000 light-years away in the constellation of Sagittarius.

A globular cluster is a group of thousands or even millions of stars that are held together by gravity. This group, named NGC 6558, is located close to the center of the Milky Way. Previous Hubble images also show similar globular clusters near the heart of our galaxy, which are being investigated as part of a Hubble project.

This glittering gathering of stars is the globular cluster NGC 6558, and it was captured by the NASA/ESA Hubble Space Telescope’s Advanced Camera for Surveys. NGC 6558 is closer to the center of the Milky Way than Earth is, and lies about 23,000 light-years away in the constellation Sagittarius.

“Globular clusters are interesting natural laboratories where astronomers can test their theories,” Hubble scientists write. “Because the stars in a globular cluster formed at approximately the same time with similar initial compositions, they provide unique insights into how different stars evolve under similar conditions. This image comes from a set of observations investigating globular clusters in the inner Milky Way. Astronomers were interested in studying these globular clusters to gain greater insight into how they form and evolve.”

As you can see in the image, stars come in a variety of colors, and this color can gives clues to their age. That’s because a star’s color is a function of how hot its surface is, and surface temperature is related to age. However, the mass of a star also plays a role, not to mention factors like the redshift observed in very distant stars or dust which can get in the way and affect the perceived color of a star. Generally speaking, blue stars are typically the youngest and hottest, while as stars age and use up their fuel they become cooler and redder.