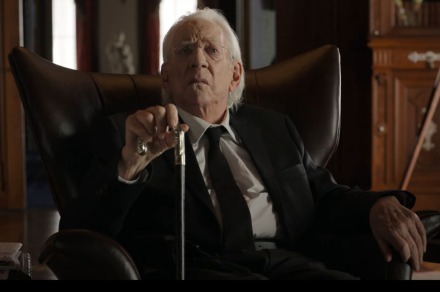 When you’ve written as many stories as Stephen King has, some of them tend to blend together. So if the first trailer for Mr. Harrigan’s Phone reminds you of Apt Pupil, then it’s understandable. Both stories revolve around a teenage boy forming an odd bond with an elderly mentor. But while Mr. Harrigan is no Nazi, he’s not an innocent either. And as you can see in the trailer below, Harrigan may even be responsible for a murderous rampage from beyond the grave.

Veteran actor Donald Sutherland is starring in the film as Mr. Harrigan, but the bulk of the movie appears to take place from the point of view of Craig (Jaeden Martell). By all outward appearances, Craig is a normal boy who endures horrific torment and bullying at school. That’s one of the reasons why Craig turned to Harrigan for advice. And when Harrigan dies suddenly, Craig finds himself emotionally bereft without his guidance. That leads to some questionable choices.

If Mr. Harrigan really is rising from his grave to murder Craig’s tormentors, then it’s likely the kid’s fault. Who leaves a working phone with the body of a dead man? And it’s always a bad idea to pay for cell service in Hell. If the damned want to phone the living, then they should call collect!

Of course, there is also the possibility that Craig is simply losing his mind. But in King’s stories, it’s almost always supernatural in the end.

John Lee Hancock wrote and directed Mr. Harrigan’s Phone, which will premiere on Netflix on October 5.