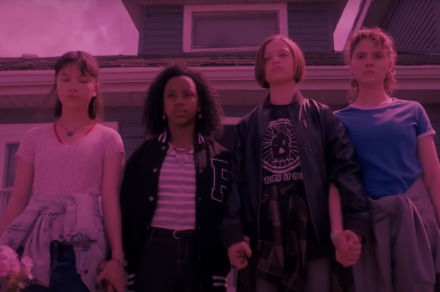 In the next few weeks, you’re going to see a lot of comparisons between Prime Video‘s new series Paper Girls and Netflix’s breakout smash Stranger Things. It’s a comparison that even we’ve made before, and it may seem like Prime Video is jumping on the bandwagon with this series. However, it’s based on the Paper Girls comic book series by Brian K. Vaughan and artist Cliff Chiang that debuted in 2015, almost a year before Stranger Things. The nostalgia factor is high in the first full trailer for the series, as we’re about to go back to the ’80s once again. And that’s where things get weird … and strange.

The trailer formally introduces the four paper girls in question: Mac Coyle (Sofia Rosinsky), Tiffany Quilkin (Camryn Jones), KJ Brandman (Fina Strazza), and Erin Tieng (Riley Lai Nelet). They’re not exactly friends when they cross paths in 1988, they simply share the same job. But somehow, they find themselves trapped in 2019. And it’s not the same present that we lived through. In this world, time travel is a crime, and these girls are suddenly wanted fugitives.

Erin’s older self (Ali Wong) will be their first ally in 2019, but she won’t be the last. If the footage is any indication, the girls will have a lot to learn from their adult counterparts, and vice versa. Their shared experience also seems to cement a friendship that wasn’t there in the original timeline.

Here’s the official description for the series from Prime Video:

“It’s the day after Halloween in 1988 when four young friends accidentally stumble into an intense time war and find themselves inexplicably transported to the year 2019. When they come face-to-face with their adult selves, each girl discovers her own strengths as together they try to find a way back to the past while saving the world of the future.”

Paper Girls will premiere on Prime Video on July 29.