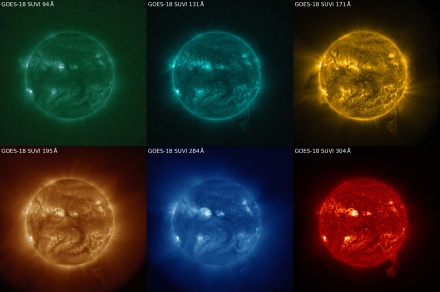 Sun’s activity is ramping up with more solar flares expected

The sun has been particularly active recently, and this weekend the Earth experienced the effects of a solar storm. The sun recently unleashed a coronal mass ejection (CME) on July 21 that has been traveling through the solar system and created a minor geomagnetic storm as it arrived at Earth.

The Solar Ultraviolet Imager (#SUVI) aboard @NOAA&#39;s #GOES16?? saw a stormy Sun on July 21! You can see a #CoronalMassEjection just above the middle of the Sun near the end of this animation (arrow). @NWSSWPC says a G2 (moderate) geomagnetic storm is likely on July 23. pic.twitter.com/bOTt88kg6k

This kind of solar activity is unlikely to affect most people’s everyday lives, but it can affect satellites and make auroras visible in further parts of the globe than is typical. These kinds of solar events are likely to become more frequent in the coming months, according to the National Oceanic and Atmospheric Administration (NOAA) due to the sun’s cycle of activity.

“The sun’s 11-year activity cycle is ramping back up, meaning phenomena such as CMEs and solar flares are increasing in frequency,” NOAA writes. “Depending on the size and the trajectory of solar eruptions, the possible effects to near-Earth space and Earth’s magnetosphere can cause geomagnetic storms, which can disrupt power utilities and communication and navigation systems. These storms may also cause radiation damage to orbiting satellites and the International Space Station.”

We do now have a new instrument for observing such outbursts, in the form of NOAA’s GOES-18 satellite. Launched by NASA in March this year, this weather observation satellite has already sent back stunning views of our planet taken using its Advanced Baseline Imager instrument. But it also has other instruments on board for observing the sun, including an X-ray and extreme-ultraviolet (EUV) camera….