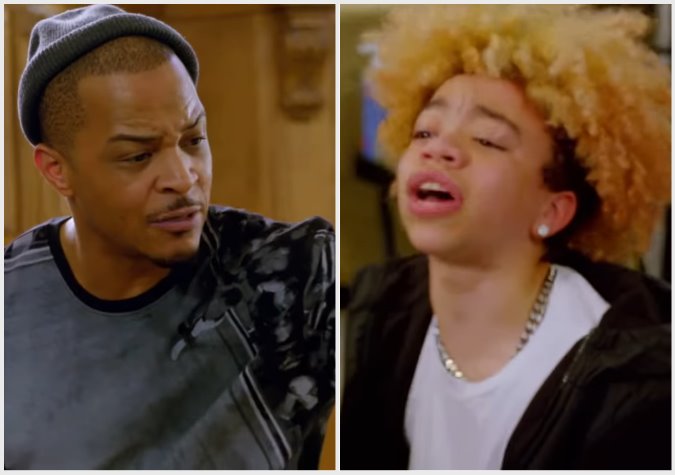 T.I. Addresses Footage of Son King Harris Getting Into a Heated Argument with Waffle House Employees

T.I. is speaking out after video footage shows he and Tiny’s son King Harris getting into a heated dispute with several employees at a local Waffle House after the 17-year-old aspiring artist’s received unwanted pickles in his meal.

The incident reportedly occurred earlier this month after a worker allegedly messed up his order. The rapper recorded the entire encounter via his Instagram Live.

King was seen sitting in the backseat of a car when he noticed something off with what he had purchased. A request to not add pickles to his meal was not honored, and King quickly became frustrated.

“I’m ’bout to go in here and J down. They got me f-cked up,” King told his followers before adding, “N-gga think I won’t jump across that table. Aight. Watch this.” King walked in and almost immediately went on a profanity-laced tirade.

Things got worse when someone off camera told him he couldn’t curse inside the establishment. “You can talk like that outside,” they added.

“I can talk how the f-ck I want to wherever I’m at,” the teen yelled back. “I’m on live, shorty. Stop talking to me. This ain’t you f-cking restaurant. Everything you make, I can pull out my pocket right now. I ain’t typing on you. Get the hell out my face. I’m not talking to you.”  When asked his name, the “T.I. & Tiny: Family & Friends Hustle,“ star shouted, “My name King. You know it and your mama know it. Tell your mama ‘happy Mother’s Day.’”

One worker even invited the Atlanta native to approach the cooking area of the store to fight. King did not bow out and soon hopped on the counter as if ready to accept the offer. “Come here, I’ll show you what I can do,” he yelled repeatedly.

Later he walked outside but continued to taunt the employee and threatened to “pistol-whip him.” “Wait till I get back and see ’em out here late night,” King went on before hopping in a vehicle and taking off.

People on social media were stunned, with mentions of his famous father quickly pouring in. “TI need to…