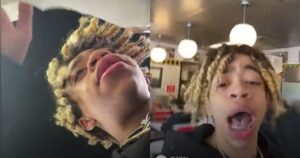 A recent video of T.I.’s son went viral after he is seen berating employees at a local Waffle House.

The incident took place earlier this month but went viral last week after the rapper’s son, King streamed it live for all to see after a cook allegedly made a minor error in his order.

T.I. spoke on the incident over the weekend saying that he is “perplexed” as to why his son felt the need to do what he did.

According to XXL, T.I. took to Instagram Live to speak on the incident that his 17-year-old son, King created and felt the need to film. He stated that he and others had a conversation with the young teenager wondering why he was interacting with “someone who’s at another level of life.”

“Of course, I spoke with my son. Me and his uncles,” the reality TV star said. “We were perplexed by his necessity to go back and forth with the short-order cook. I didn’t understand why he felt he needed to stop what he was doing to engage someone who’s at another level of life.”

Tip also expressed that he also told his son he has to remove himself from that energy and go enjoy his life.

“I had to explain to him that when people are not living like the way they hoped they would live and here you [are] walking in enjoying so much freedom and luxury and, you know, people are going to posture themselves a certain way,” T.I. said.

It was also reported that T.I. was confused as to “why in the hell is it more newsworthy to report that the man got into an argument” with someone who works at a restaurant, when, in fact, they should be speaking on “the fact he graduated with honors and the A and B honor roll at 17.”

Also adding, “I don’t understand what world we’re living in, when this is what we’d rather promote?”