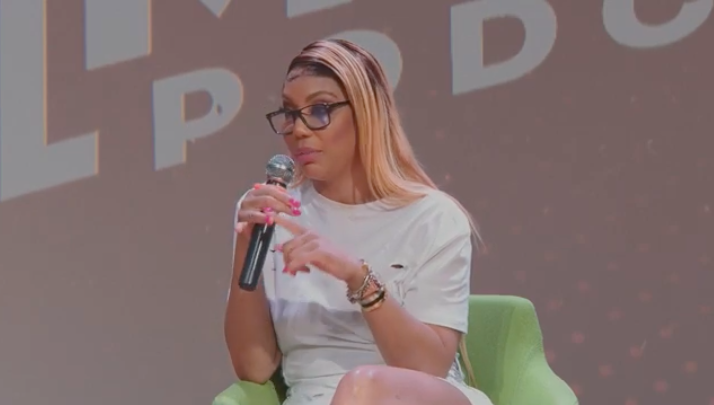 Tamar Braxton Opens Up About Her Current Relationship with ‘The Real’ Co-Hosts, Says She Hasn’t Spoken to Loni Love

Tamar Braxton discussed her current relationship status with her former “The Real” co-hosts during a recent interview with the “State of Black Music” podcast.

“The Real,” which ran from 2013 to 2022, was a daytime television show which at one point featured Braxton, Tamera Mowry, Adrienne Bailon, Loni Love, and Jeanie Mai. Braxton would ultimately leave the series in 2016 after she was let go. Immediately following Braxton’s exit, the singer would blame all four women for getting her fired, which they all denied. Since then Braxton has reconciled with Bailon and Mowry.

Tamar Braxton opens up about her current relationship with her co-stars from “The Real” Adrienne Bailon and Tamera Mowry. The singer also revealed she hasn’t spoken to Loni Love. (Photo:thenmaam/YouTube)

In the June 17 interview, Braxton expressed that despite hashing out the public feud, she’s only been able to connect with Bailon and Mowry. Braxton claimed that she and Mai didn’t have any beef. In fact, Braxton insisted that the “Hello Hunnay with Jeannie Mai” star vouched for her when she was fired.

She said, “Well, I’ve only connected with Adrienne and Tamera. I mean a lot of people think me and Jeannie had beef, but we didn’t. When everything happened, she was the most vocal out of everyone behind the scenes, and that’s not something that people know. I never said anything because I didn’t know if that’s something she was comfortable with. … I appreciate her for that, because she didn’t have to.”

While switching the subject, Braxton mentioned how much she loved Bailon and the lessons she learned from their friendship.

Vraxton said, “I think Adrienne is an amazing human being, and I’ve learned a lot from her with her relationships with females. She’s taught me how to truly let things go and not have beef but not have any affiliation. But I love her. We don’t have beef and we do have affiliation. I’m not talking about her. She taught me that and that was big in my life.”

When asked if she and Love have reconciled, Braxton replied, “I haven’t seen…