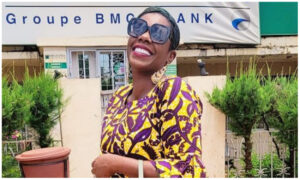 Blogger Latasha Kebe, aka Tasha K, is reportedly asking a federal court to stop rapper Cardi B from garnishing her bank accounts until after her appeal is heard. The recording artist, whose real name is Belcalis Almánzar, moved to garnish Tasha K’s bank accounts at J.P. Morgan Chase to collect on the $3.3 million the blogger owes her.

Almánzar won a $4 million judgment after she sued Kebe for defamation in 2019. Kebe claimed that the “WAP” rapper had worked as a prostitute and had a venereal disease. Kebe lost and was ordered to pay the rapper a total of $4 million. The YouTuber filed an appeal which is currently pending.

However, Almánzar recently filed papers with a Georgia court to garnish Kebe’s bank accounts, and now the blogger is requesting that a federal court intervene to stop the rapper until her appeal is heard. Kebe also shared a photograph on Instagram of herself laughing as she stood in front of the Bank of Africa in Bamako, Mali on Sept. 23.

One fan noted, “This is what snitching on yourself looks like.” After Kebe posted several pictures of herself abroad visiting Kenya, Morocco and Mali earlier this month, fans questioned if Kebe had moved to somewhere in Africa to avoid paying the money she still owes Almánzar. The blogger claimed that she was on vacation but also mentioned her “new life in Africa” on Instagram. She also posted pictures of herself and the rapper with the caption, “Welp, #YouTube video up in 5 minutes. Since your fav keeps BEGGING for these little coins, ask her how she wants the 4 million? In Guinea Francs or Ugandan Shillings?”