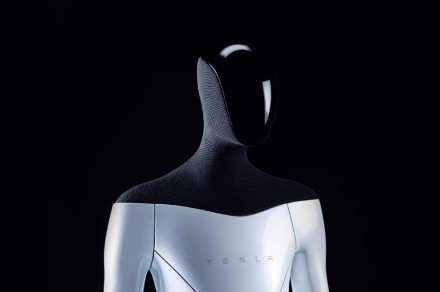 Tesla and Elon Musk are set to unveil an early prototype of Tesla Bot at the company’s AI Day on September 30. The Tesla Bot — also referred to as Optimus — will be a humanoid robot designed to complete repetitive or dangerous tasks.

The first major customer of the helper robos will be Tesla itself, as the company is said to plan on implementing them to complete work in its factories.

Optimus was first unveiled at last year’s AI Day, where a rendering and some specs about the Tesla Bot were revealed by Musk himself. These humanoid robots will obviously be made to work in Tesla’s factories and are meant to interact with both humans and machines, specifically for “dangerous, menial, or boring tasks,” according to Musk. In the presentation, he even talked about the personality of these robots, claiming that they’re meant to be friendly, and even easily overpowered by a human.

Earlier this summer, Musk hinted that we’d be getting the first look at a working prototype of Optimus.

The prospects of a robotic workforce seem appealing at first, especially in the midst of a labor shortage. However, experts are skeptical of how effective the robots will be, and they doubt the company’s capability to accomplish significant leaps in robotics that will make the Optimus a viable alternative to a human workforce.

In an interview with Reuters, Nancy Cooke, a professor in human systems engineering at Arizona State University, shared her skepticism quite bluntly.

And skepticism is well-warranted, especially where Elon Musk is concerned. While Tesla kickstarted the EV market, Musk has a tendency to overpromise and underdeliver (if he delivers at all). His Hyperloop project — currently under development at the Boring Company — is way behind schedule, and some obserevrs think the delays are intentional.

Musk even thinks that Optimus will be more significant…