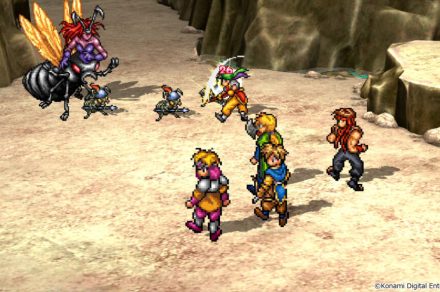 The first two Suidoken games are getting remasters in 2023

Konami just announced Suikoden I & II HD Remaster: Gate Rune and Dunan Unification Wars, a package that will modernize two classic PlayStation RPGs. It will launch in 2023 for PC, PlayStation 4, Nintendo Switch, and Xbox One.

The first two Suikoden games were released in 1995 and 1998, respectively, for the original PlayStation. They were then made available for other platforms like the Sega Saturn and PC. Both games were also rereleased once before for the PlayStation Portable in a bundle called Genso Suikoden I & II in 2006. However, this version was never released outside of Japan.

The remake has enhanced visuals with improved lighting, cloud effects, and shadow animations. The art direction has been redesigned, breathing new life into the original’s style. The character portraits have also been redrawn and updated in HD by Junko Kawano, the artist who originally designed the characters in 1995.

More environmental sound effects have been added that weren’t present in the original version, including running water, wind, insect noises, and running footsteps. There are also some new quality-of-life features such as a dialogue log, auto-battle functionality, and double-speed battle capability.

The last mainline entry for this franchise was Suikoden V in 2006 for the PlayStation 2, and the last spinoff game was Gens? Suikoden: The Woven Web of a Century for the PlayStation Portable, the latter of which was released in 2012 and never left Japan. Since then, the series has been dormant. However, Kawano, along with fellow series creator Yoshitaka Murayama, teamed up in 2020 to form the studio Rabbit & Bear to develop a spiritual successor to Suikoden called Eiyuden Chronicle.