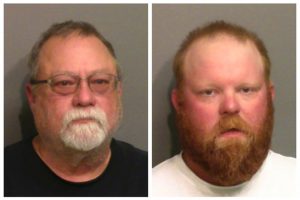 Gregory and Travis McMichael, the father and son convicted in the death of Ahmaud Arbery were sentenced to life in prison Monday after federal convictions for a slew of federal charges including interference with rights, a hate crime.

CNN reports the McMichael’s neighbor, William Bryan Jr., the third man involved in Arbery’s death, received 35 years for his actions. All three are currently serving life sentences for their convictions in state court on a litany of charges related to Arbery’s death.

“My son was shot not one time, not two times, but three times,” Arbery’s mother Wanda Cooper-Jones said before Travis McMichael’s sentence was given.  “Your honor,” she said, “I feel every shot that was fired every day.”

Cooper-Jones and other members of Arbery’s family asked US District Judge Lisa Godbey Wood to give Travis McMichael the maximum possible sentence under federal guidelines.

“The Justice Department’s prosecution of this case and the court’s sentences today make clear that hate crimes have no place in our country, and that the Department will be unrelenting in our efforts to hold accountable those who perpetrate them,” Attorney General Merrick B. Garland said in a statement. “Protecting civil rights and combatting white supremacist violence was a founding purpose of the Justice Department, and one that we will continue to pursue with the urgency it demands.”

Both sentences were preceded by emotional testimony from Arbery’s family, which told the court how the killing changed their lives. Cooper-Jones said during her testimony she was confused when she was told that Gregory McMichael was with his son Travis when Arbery was killed.

“I struggled to come to the realization that a father would actually accompany his son to take a life,” she said….