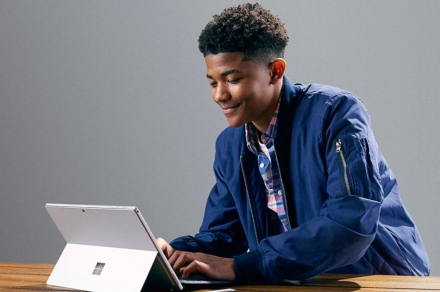 The Microsoft Surface Pro 7 is $135 cheaper at Walmart

Microsoft’s Surface Pro series of tablets are pretty well-known at this point and are often compared to the iPad Pro in their various iterations, and while it hasn’t always been a hit, they’re still competitive 2-in-1s that cost much less. For example, Surface Pro deals often bring them down to reasonable prices, like this deal from Walmart on the Microsoft Surface Pro 7, which is going for $900 and a nice $135 discount on its normal $1,035 price.

Why you should buy the Microsoft Surface Pro 7

The Microsoft Surface Pro 7 sits in a peculiar place because it doesn’t represent a big leap forward like other iterations of the Pro, and yet it is priced pretty well for its specs. Under the hood, there’s a 10th-gen Intel i5-1035G4 processor that should handle most of your productivity tasks, video meetings, streaming content, and general day-to-day use. The 16GB of RAM also helps so that you don’t feel constrained or as if you’re constantly managing your apps and browser tabs because the device can’t handle them. That said, the internal storage is only 256GB, so you may want to reach for an external hard drive deal to supplement the internal storage.

Of course, the most visible and enjoyable part is the 12.3-inch screen with a 2,736 × 1,824 resolution, about the same as an iPad Pro, so you’re getting some high-end picture clarity and fidelity. The size also makes the Surface Pro 7 easy to carry around, as it weighs around 1.7 pounds, which, granted, is a little bit more than the iPad Pro but is still not too heavy to hold up. The pen experience is what sells it, although there’s still not an internal slot for it and it hangs on the side using a magnet, which isn’t ideal. Even so, the iPad Pro has the same issue.

Overall, the Microsoft Surface Pro 7 is a great tablet that for what it offers in terms of cost, especially with Walmart’s deal bringing it down to $900 and a $135 discount on its regular $1,035 price. But if you want to consider a few more options, there are some great laptop deals you can look at to compare.