BREAKING NEWS
GMT-4 11:27
Home Technology The next folding Moto Razr may smooth out any screen crease 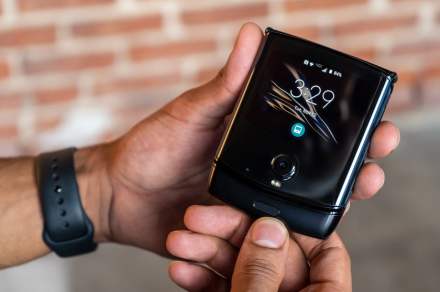 The next folding Moto Razr may smooth out any screen crease

More rumors about the next Motorola Razr folding smartphone are spreading, and they’re very intriguing. While we have already reported how the next Razr could move away from the offbeat design by ditching the chin, a new leak reveals it could also ditch the crease. Take a look at this GIF, which supposedly shows the “Maven,” a codename associated with the third and currently unofficial Motorola Razr phone, being folded up.

The leak was posted to Twitter by Evan Blass, who is well-known for accurate leaks of future devices, and even when you look closely it’s hard to spot much of a crease on the screen. To recall, earlier Motorola Razr phones adopted a dew-drop hinge design to minimize the crease, but it wasn’t very effective. However, it looks like this could change on the new model. This is similar to the Oppo Find N, which has a minimal crease on its foldable display.

When unfolded, we can see a big outer display on the smartphone. It is similar to the previously leaked images of the foldable, and also shows two cameras sitting in a horizontal module. If the leaks are to be believed, the next Motorola Razr will feature a triple-camera setup led by a 50-megapixel, f/1.8 primary shooter alongside a combination of 13MP wide-angle and macro sensor. It will get a 32MP selfie shooter.

Unlike the previous Razr foldables, the upcoming version looks set to be powered by the latest Qualcomm flagship chipset, the Snapdragon 8+ Gen 1. It is said to be supported by 8GB or 12GB of RAM and 256GB or 512GB internal storage options. However, you will have to wait to get your hands on the device as it is expected to launch in China first, with a global rollout to follow. As per a past report, it could come in two color options; Quartz Black and Tranquil Blue.

With the flagship processor and potentially a larger external screen, the next Razr is shaping up to rival the existing top clamshell-style folding phone, the Samsung Galaxy Z Flip 3.