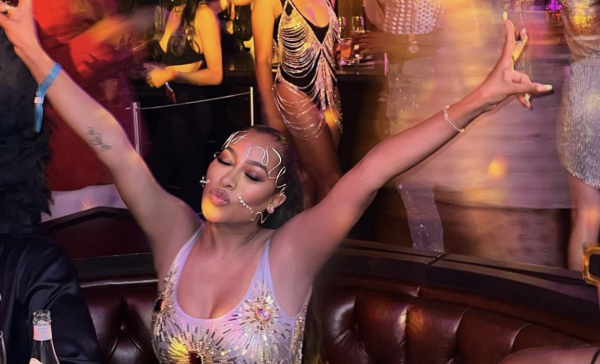 Beyoncé had a secret Renaissance party at the Times Square Edition hotel in NYC over the weekend and the celebs showed up and showed out for the star-studded event. Dubbed “Club Renaissance,” the bash was Bey’s version of Studio 54, challenging her guests to dress in their funkiest threads. Bey herself dazzled like a disco ball in vintage House of Timothy White and Tiffany & CO jewels with her husband by her side.

The Studio 54-themed event was attended by famous faces like Kendrick Lamar, Chloe Bailey, and Lala just to name a few. Guests rose to the occasion and channeled their big disco energy with gold sequin, unbuttoned shirts with chest hairs hanging out, and their best silky smooth ensembles.  The secret party was definitely the event to be at, Quest Love confirmed it with one Tweet stating “I literally watched an entire club LOSE IT.” https://twitter.com/questlove/status/1555816733700669440?s=21

Having plenty to celebrate the Renaissance album debut at number 1. on the Billboard 200, marking the first album released by a woman in 2022 to land at the top. Renaissance is Queen Beys 7th Studio album and the first since 2016.

Take a look below at some of the guests and their ‘Far Out’ outfits below.