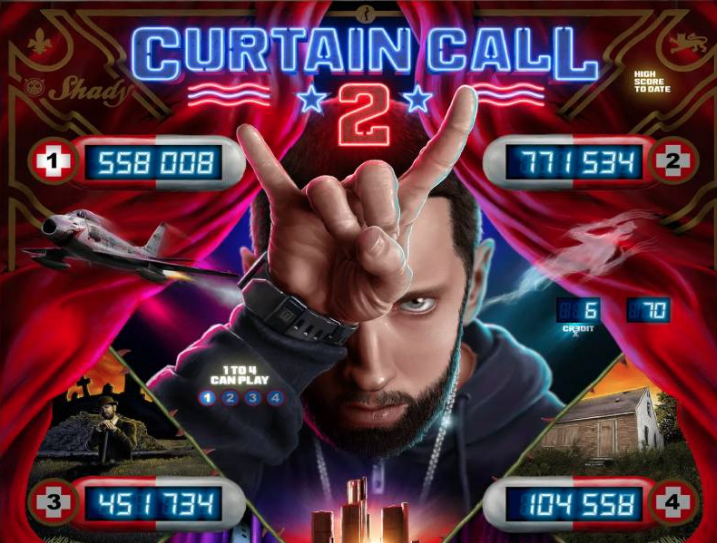 rap legend Eminem announces his second greatest hits collection, Curtain Call 2, set to be released on August 5th via Shady Records/Aftermath Entertainment/Interscope Records.  The news comes on the heels of the just released “From the D 2 the LBC,” an epic new single featuring fellow icon Snoop Dogg. The song – and it’s accompanying James Larese-directed video — made its global premiere on June 23 at Ape Fest, the Bored Ape NFT event at NFT.NYC.

The song is the lead single from Curtain Call 2, a hits collection comprised of the inimitable Detroit MC’s creative output since the 2005 release of Curtain Call: The Hits. Curtain Call 2 will include music from all Eminem projects from Relapse forward, including side-projects, guest appearances, film soundtrack songs, and of course selections from his solo albums.

In addition to the standard release, there will be a limited edition box set and a limited quantity of autographed vinyl available on Eminem.com – sign up for first access to these offerings here. (shop.eminem.com)

The Eminem/Snoop Dogg collaboration follows the June 16th release of “The King and I,” a CeeLo Green-assisted song Eminem contributed to the soundtrack for Baz Luhrmann’s Elvis biopic, which is also included on Curtain Call 2.

Along with the two recently released songs above, there will be one additional previously unreleased track on the collection, to be revealed in the coming weeks.