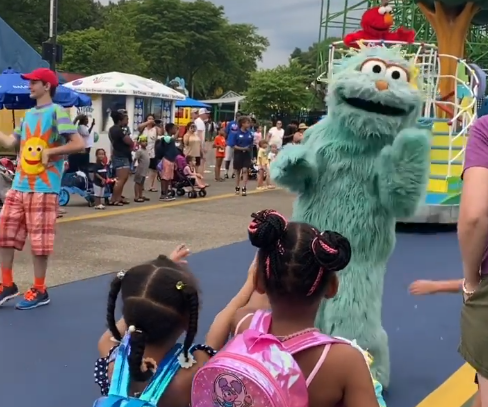 Earlier this month, a video of a Sesame Place employee went viral as the employee, dressed as the character Rosita, gave members of the parade audience high fives and ignored two Black girls and walked away. This prompted other people to come forward and share videos of alleged discrimination they faced at Sesame Place.

Now, a Baltimore family is suing Sesame Place for $25 million over claims of racial discrimination.

The family is accusing four employees dressed as Sesame Street characters of ignoring Quinton Burns, his daughter Kennedi Burns, and other Black guests at a meet and greet that took place on June 18. The lawsuit states that “SeaWorld’s performers readily engaged with numerous similarly situated white customers.”

“Kennedi was forced to experience racism at the age of five; this is unacceptable and we will not stand by and let this continue,” said the family’s attorney, Malcolm Ruff, at an news conference in Philadelphia.

The family is looking for $25 million in damages from SeaWorld Parks and Entertainment – which owns Sesame Place. The lawsuit is said to be on behalf of all Black people that have visited the park since July 27, 2018, and suffered discrimination and racism from employees.

As for the family who posted the original video of the racism taking place at the Sesame Place theme park, they too are suing the park for discrimination. After the video went viral, the park commented saying that the employee did not snub the two Black children, but was saying no to other parents that wanted their child to take a picture with the character. However, another video surfaced, showing that there were no other parents around the two kids, and that the employee then hugged two white children that were standing next to the Black kids.