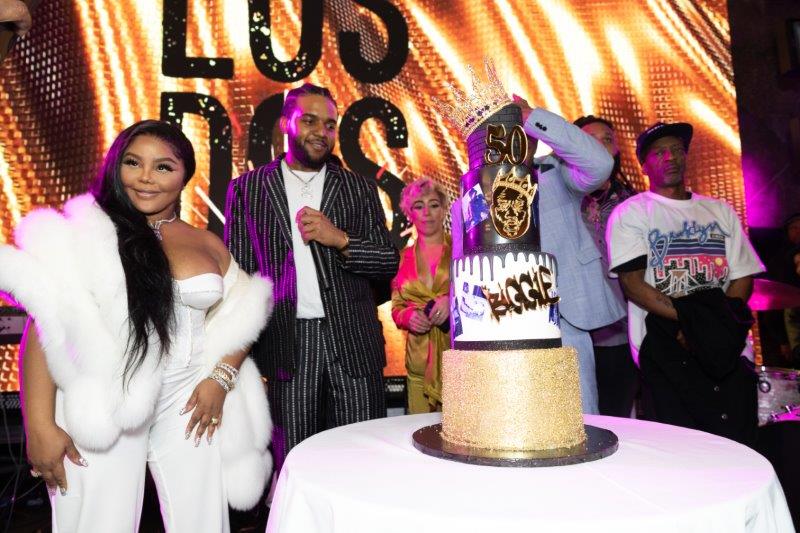 The rainy weather didn’t keep Brooklyn and the rest of the New York from showing up and showing out for the exclusive, black-tie Notorious B.I.G. 50th Birthday Gala. Last weekend, the city’s biggest influencers and tastemakers were all on hand the bring in what would’ve been Biggie’s 50th born day(May 21). Sponsored by Pepsi and put on by the Christopher Wallace Estate, Manhattan’s Guastavino’s was the locale of the prestigious bday bash for the game’s most celebrated emcee, which drew celebs from all facets of urban entertainment.

B.I.G.’s real friends, family and diehard supporters were in attendance for this second annual event. Everyone impactful in his career was in attendance; from his original Brooklyn family/crew, Lil’ Kim , Lil Cease and Junior M.A.F.I.A., to his extended family in the Hip Hop community, including Fat Joe and Sway Calloway, who conducted Biggie’s last radio interview just four days before he was killed in Los Angeles on March 9, 1997.

The night began with an exclusive full course dinner while a live band called The Frank White Experience played some of Biggie’s most revered hits, which preceded some of his “Notorious” hits being played in digital format by none other than HOT 97’s DJ Enuff for the capacity crowd to enjoy. A large ice sculpture with the letters “B.I.G.”graced the stairs to the entrance of the upper level gala, where many of the attendees took their “I was there” pics.