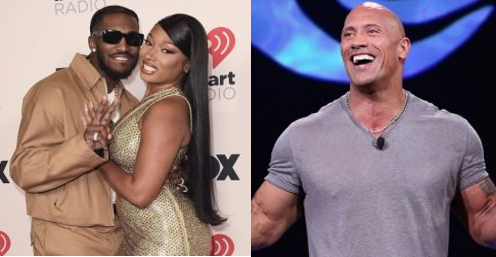 During a promo run for his latest animated film, Dwayne “The Rock” Johnson was asked during an interview who’s celebrity “pet” would he be. The former wrestler turned movie star answered saying he would want to be Megan Thee Stallion’s pet.

When asked why Meg, The Rock said “We don’t have to talk about that.”

not Dwayne “The Rock” Johnson saying he’ll be Meg Thee Stallion dog when they asked him who celebrity dog he’ll be . LMFAOOOOO I FEEL YOU MY BOY . pic.twitter.com/bzqsqerqHX

The clip went viral over the weekend, and even caught the attention of Megan Thee Stallion’s boyfriend Pardison Fontaine. Pardi took to IG where he cringeworthing-ly clapped back at The Rock for his innocent answer.

On IG he posted the video of The Rock making his “pet” comment and wrote in the caption “All Our dogs is named after #s… Just teach ya wife how to use seasoning… You’ll be iight… Moana is the shit tho,” Pardi wrote.

It is unclear what he meant by “all out dogs is named after #s,” but social media clowned Pardi for his awkward response to The Rock.

If The Rock Said I take Megan from pardi I could understand. Rock was just joking. Pardi Look Lame attacking Him

Pardi was really bothered by The Rock saying he’d be a pet for Megan Thee Stallion. How you beefin with The People’s Champ? lol

Pardi ain’t did nothing to 5’4 Tory Lanez who shot his chick . Wtf he gonna do with 6’5 270 nigga used to wrestle for a living named The Rock lmaooooo https://t.co/3oEaD6ebp1