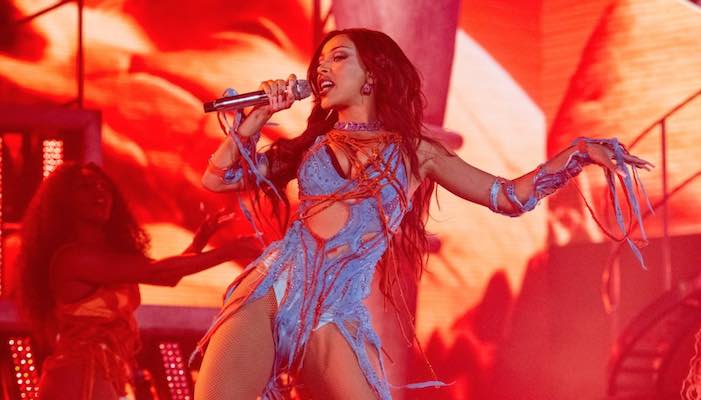 Elvis may be known for the blues, but the new movie about his life will feature some of hip-hop’s hottest names including Doja Cat, Eminem, CeeLo Green, Tame Impala, Swae Lee, Diplo, Jazmine Sullivan, and more.

The biography about the famous late artist aptly titled Elvis, debuted at the Cannes Film Festival this week. The biopic is directed by Baz Luhrmann (The Great Gatsby, Romeo & Juliet) and stars Austin Butler in the lead role as Elvis. The movie also stars Tom Hanks and Maggie Gyllenhaal.

The soundtrack, which will be released on June 24, the same day the movie hits theaters, is already getting almost as much hype as the film itself, namely for its eclectic mix of artists, many of whom have integrated his music into their own original works.

While the soundtrack itself is still under wraps, Doja Cat already teased her piece at Coachella last month. She performed her song “Vegas,” an interpolation of Elvis’s 1956 hit song “Hound Dog,” receiving rave reviews from the audience and critics alike. A sample is available on YouTube.

The other artists have not yet teased their work on the album, but it appears based on an Instagram post that Eminem and CeeLo Green have a collab on the soundtrack. In addition to the previously mentioned hip-hop artists, other notable names on the soundtrack include 70’s icon Stevie Nicks, Europe’s Måneskin, country artist Kacey Musgraves, new rapper Nardo Wick, Australian dance music trio Pnau, and other emerging artists.

In addition to gracing the album of what is already likely to be one of summer’s hottest films, Doja Cat has a busy summer coming up as she prepares to embark on The Weeknd’s Dawn FM arena tour.