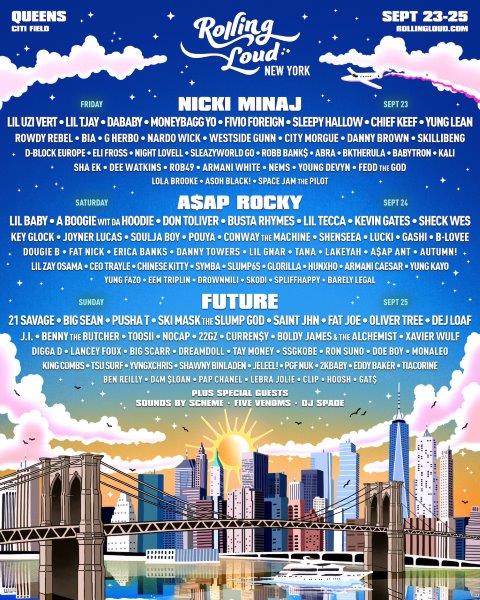 In a new report by the New York Times, the NYPD has asked Rolling Loud New York organizers to remove drill rappers from the festival lineup.

A few drill rappers who were set to perform told the Times that they were removed from the lineup. Those removed include Bronx artists Sha Ek and Ron Suno, as well as Brooklyn artist 22Gz. Their removal comes just one day before the 3-day long festival is set to start.

However, this is not the first time in which the NYPD has asked for organizers to remove drill rappers from their lineup. A similar incident occured in 2019 where event organizers recieved a letter from the NYPD requesting for the removal of 22Gz, Pop Smoke, Casanova, Sheff G, and Don Q.

“The above listed performers have been affiliated with recent acts of violence citywide,” the letter read. “The New York City Police Department believes that if these individuals are allowed to perform, there will be a higher risk of violence.”

This comes as lawmakers, and even the newly elected mayor of New York, Eric Adams, have started to crack down on drill music for the violence it perpetuates both within and outside of music.

“We pulled Trump off Twitter because of what he was spewing, yet we are allowing music, displaying of guns, violence, we are allowing it to stay on the site, because look at the victims,” Adams said in February. “We’re bringing them in, we’re going to show exactly what is being displayed, and we are alarmed by it. We are alarmed by the use of social media to really over-proliferate this violence in our communities.”

“We pulled Trump off Twitter … yet we are allowing music displaying of guns, violence.”

— NYC Mayor Eric Adams (D), after his son sent him drill rap videos, says he will try to get the videos banned from social media. pic.twitter.com/ATGmhpi4Bo

In a statement to the NYT, 22G’z record label confirmed that he had been dropped from the lineup. However, the rapper is currently facing attempted murder…