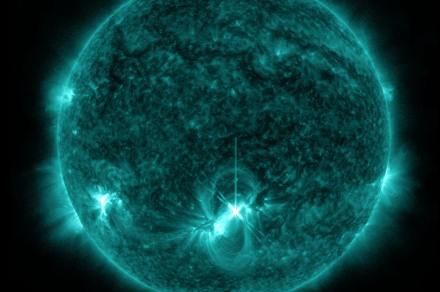 The sun is even more active than expected right now

The sun goes through a regular 11-year cycle of activity, sometimes becoming more active and sometimes less. We’re going through an upswing of its current cycle, called Solar Cycle 25, in which the sun is predicted to be more active. But so far in this cycle, the sun’s activity is even exceeding these predictions.

As NASA writes, Solar Cycle 25 began in December 2019 and activity has been increasing since then. The activity is scheduled to peak in a period called the solar maximum, set for 2025, but even before then the sun is making its presence felt. The increase in solar activity can impact the Earth in the form of space weather, with solar flares and coronal mass ejections sending charged particles out from the sun and through the solar system, impacting satellites and communication systems here on Earth.

An image of a solar flare shows a subset of extreme ultraviolet light that highlights the extremely hot material in flares and which is colorized in teal. NASA/SDO

This recent image from NASA’s Solar Dynamics Observatory shows a solar flare given off by the sun on May 10, 2022. It has this color because the instrument records in the extreme ultraviolet range, beyond the visible light range. The flare is the bright spot seen in the lower half of the sun.

These types of events will become more common throughout the solar cycle. “The Solar Cycle 25 Prediction Panel, an international group of experts co-sponsored by NASA and NOAA, predicted that this would be a below-average solar cycle, like the one before it – Solar Cycle 24,” NASA writes. “However, the Sun has been much more active this cycle than anticipated.”

This activity affects Earth when charged particles arrive on our planet and interact with the atmosphere, creating auroras. But these particles don’t just create attractive effects — they can also cause problems for satellites, which can give rise to communications issues. Space weather can also be potentially dangerous for astronauts, like those on the International Space Station, and can even have health concerns for crew and passengers flying on airplanes.