BREAKING NEWS
GMT-4 01:37
Home Technology There could be a brand new meteor shower visible on Monday 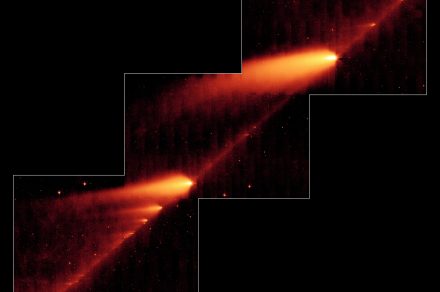 There could be a brand new meteor shower visible on Monday

This Memorial Day weekend there’s a chance you could view a special astronomical event: A never-before-seen meteor shower called the Tau Herculids.

The new meteor shower could be visible on the night of May 30 into May 31 in North America, which is an exciting possibility. However, it’s hard to predict if meteors will actually be visible or not, as it is what NASA calls a “hit or miss” event.

This infrared image from NASA’s Spitzer Space Telescope shows the broken Comet 73P/Schwassman-Wachmann 3 skimming along a trail of debris left during its multiple trips around the sun. The flame-like objects are the comet’s fragments and their tails, while the dusty comet trail is the line bridging the fragments. NASA

The reason the event is uncertain is related to the fact that it is new. Meteor showers happen when the Earth intersects with clouds of debris, and pieces of this debris enter the atmosphere and burn up, appearing as a bright streak in the sky.

In a typical meteor shower, like the Eta Aquariid meteor shower which happened at the beginning of May, the source of the debris comes from a known comet — in this case, it was Halley’s comet. Halley’s comet orbits the sun every 76 years and as it approaches the sun it heats up and releases particles of debris. The debris this particular comet leaves behind is responsible for both the Eta Aquariid and Orionid meteor showers as Earth reaches the debris once per year in its orbit around the sun.

But the Tau Herculid meteor shower is new because the comet responsible for the debris only broke into pieces recently. The comet, technically known as 73P/Schwassmann-Wachmann and more commonly referred to as SW3, was first seen in the 1930s but then wasn’t spotted again until the 1970s because it was so faint. When it was observed in 1995, it was suddenly much brighter and astronomers realized it had shattered into pieces, leaving a trail of debris in its wake. The comet continued to fragment into smaller pieces over time, and now Earth is passing through its debris cloud and it could lead to a spectacular meteor shower.

“This is going to be an all…