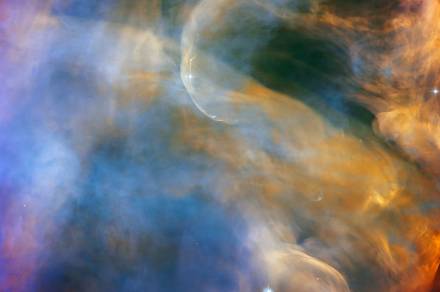 This colorful Hubble dreamscape is sculpted by newborn stars

The image from the Hubble Space Telescope shared this week is particularly dreamy and stunning, showing the bright colors and soft shapes of a Herbig-Haro object called HH 505. These nebula-like objects are formed from young, energetic stars, which give off jets of ionized gas which collide with clouds of dust and gas.

“Herbig-Haro objects are luminous regions surrounding newborn stars that form when stellar winds or jets of gas spew from these infant stars creating shockwaves that collide with nearby gas and dust at high speeds,” Hubble scientists explain. “In the case of HH 505, these outflows originate from the star IX Ori, which lies on the outskirts of the Orion Nebula around 1,000 light-years from Earth. The outflows themselves are visible as gracefully curving structures at the top and bottom of this image. Their interaction with the large-scale flow of gas and dust from the core of the nebula distorts them into sinuous curves.”

This image was taken using Hubble’s Advanced Camera for Surveys, which typically looks in the visible light range but can also look in the far ultraviolet part of the spectrum. In the Orion Nebula where object HH 505 is located, there is plentiful ultraviolet light given off by massive stars, which interacts with the dust and gas of the nebula to carve out spaces and slow down the birth of new stars.

The process of star formation is a careful balance, as stars are born in dense pockets of dust and gas which are brought together by gravity. When there is lots of dust and gas, stars can form more easily, but once stars have formed, they give off stellar winds which prevent more stars from being born nearby.

The Orion Nebula is a hotbed of star formation and as it is relatively nearby, at around 1,500 light-years from Earth, it is often studied to understand more about how stars and born.