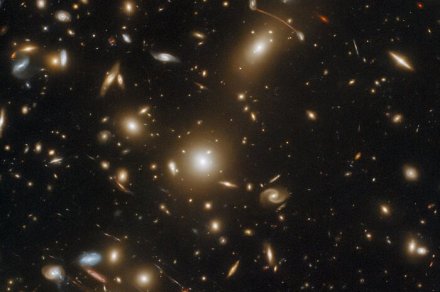 This galaxy cluster is so massive it warps space-time

It’s hard to comprehend the scale of the universe. It’s difficult to imagine even the size of the entire solar system, let alone our galaxy. And our galaxy is just one among billions in the universe. In fact, galaxies don’t just exist alone, but often interact with each other — and often come together in vast groups called galaxy clusters.

This week’s image from the Hubble Space Telescope shows one such galaxy cluster named Abell 1351, located in the constellation of Ursa Major. Galaxy clusters are groups of thousands of galaxies held together by gravity, and their masses are measured on the scale of quadrillions of times the mass of the sun. This particular observation shows what kind of effects that much mass can have on space-time.

Across the image, you can see streaks of light which are pictures of distant galaxies. Because the mass of the galaxy cluster is so great, it warps space-time enough that light passing through it gets bent and spread out, like a magnifying glass. This is called gravitational lensing, and it allows researchers to see objects such as galaxies that are far further away than we could normally observe.

There’s also an effect called microlensing, which is used to detect exoplanets, in which light from a distant object (a star in this case) appears…