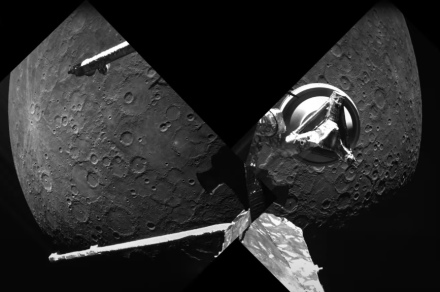 This Mercury flyby video shows the planet in amazing detail

The European Space Agency (ESA) has released a video showing a flyby of Mercury, the planet closest to our sun. The images that make up the clip were captured by ESA’s Mercury Planetary Orbiter last week during a flyby that took it close to the planet’s surface.

The impressive imaging sequence (below) comes just a few days after ESA released a couple of images from the same flyby. The video shows numerous craters caused by asteroid and comet strikes across billions of years, including the 963-mile-wide (1,550 kilometer) Caloris Basin (at the 15-second mark), identifiable by its bright appearance caused by the highly-reflective lavas on its floor.

The BepiColombo mission is a joint endeavor with Japan’s space agency, JAXA, which has sent along its own spacecraft, the Mercury Magnetospheric Orbiter. The mission goal is to analyze Mercury’s core-to-surface processes, magnetic field, and exosphere in an effort to discover more about the origin and evolution of a planet that orbits at a close proximity to its parent star. ESA and JAXA are aiming to expand the body of knowledge about Mercury following NASA’s Messenger mission to the planet between 2011 and 2015.

The Mercury Planetary Orbiter’s most recent approach took place on June 23, taking it to within about 124 miles (200 kilometers) of the planet’s surface. Jack Wright, a team member overseeing the spacecraft’s three monitoring cameras, helped to plan the imaging sequence for the flyby.

“I punched the air when the first images came down, and I only got more and more excited after that,” Wright said in comments on ESA’s website. “The images show beautiful details of Mercury, including one of my favorite craters, Heaney, for which I suggested the name a few years ago.”

Mercury’s Heaney crater (below) is about 78 miles (125 kilometers) across and features smooth volcanic plains. We can expect even more detailed images of Heaney once the spacecraft settles into its Mercury orbit in 2025.

The spacecraft’s recent flyby comes eight months after its first one, which took it to within 620 miles (1,000 kilometers) of Mercury’s…