BREAKING NEWS
GMT-4 12:20
Home Technology This month Jupiter as it comes its closest in 70 years 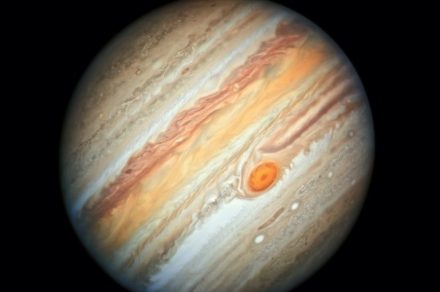 This month Jupiter as it comes its closest in 70 years

Widely considered our solar system’s most beautiful planet, Jupiter will reach opposition this month. That means Jupiter will be at its closest point to Earth, offering excellent views of this natural wonder. Jupiter’s opposition happens every 13 months, but this opposition is a special one as the planet will make its closest approach to Earth in 70 years.

When looking from Earth at a planet like Jupiter, the distance between the two planets will be shortest when the planets are in opposition. This means that Earth is directly between the sun and Jupiter, so as the sun sets in the west, Jupiter rises in the east. That’s the 13-month cycle of a typical opposition, but this opposition is unusual.

This photo of Jupiter, taken from the Hubble Space Telescope on June 27, 2019, features the Giant Red Spot, a storm the size of Earth that has been raging for hundreds of years. NASA, ESA, A. Simon (Goddard Space Flight Center), and M.H. Wong (University of California, Berkeley)

This month will see the opposition event coincide with Jupiter’s closest approach, with Jupiter coming within 365 million miles of Earth — as opposed to the 600 million miles of distance at its farthest point. That makes the next few weeks a great time for stargazers to look to Jupiter.

The closest approach will be throughout the night of Monday, September 26, but according to NASA astrophysicist Adam Kobelski, there will be great views before and after this date. “The views should be great for a few days before and after Sept. 26,” Kobelski said. “So, take advantage of good weather on either side of this date to take in the sight. Outside of the Moon, it…