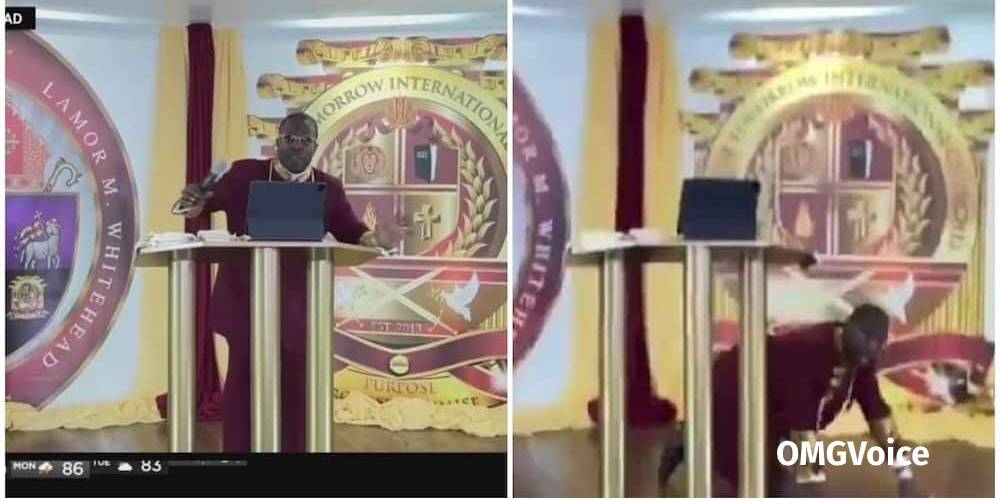 Brooklyn Bishop Lamor Whitehead was delivering his livestreamed sermon on Sunday, when a group of armed assailants interrupted the service and robbed him at gunpoint, CBS News reports.

Whitehead said shortly after he started the sermon, three or four men kicked in a door at the back of the room and marched toward him with guns in hand.

“I said, ‘Alright, alright, alright,’ pretty much stating that I’m not going to do anything because I know you’re coming for me. You’re coming straight to me. I don’t want my parishioners hurt. I’ve got women and children there,” Whitehead told the outlet. “As I got down, one went to my wife and took all her jewelry and had the gun in front of my 8-month-old baby’s face.”

The men took his bishop’s ring, wedding band, and various chains he was wearing underneath his robe.

“They watched and they knew that I have other jewelry,” he explained, adding that he believes it was a targeted robbery.

The whole moment was caught on the livestream of the sermon, although the men’s faces are not seen on camera.

However, the stream did show a gun being pointed at Whitehead, who dropped to the ground and cooperated with the thieves.

At the time of the robbery, Whitehead said there were around 100 congregants in the room, including children.

According to authorities, the assailants escaped the scene in a white Mercedes. Whitehead said that he previously helped turn in a suspect in the case of the fatal shooting of 48-year-old Daniel Enriquez back in May, and that might be why he was the target for the robbery.

In a statement, Mayor Eric Adams said that the NYPD is investigating the incident.

“No one in this city should be the victim of armed robbery, let alone our faith leaders and congregants worshiping in a House of God,” said Adams. “The NYPD is investigating this crime and will work tirelessly to bring the criminals involved to justice.”

“This Was God’s Plan! When God Gave Me This Mantle, I Had To Be Ready! As God Continue To Use Me As His…