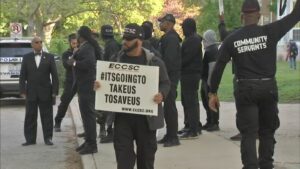 Parents and students protested Monday at the Chicago area middle school where three nooses were found.

The protest followed a series of sit-ins that took place after parents found three nooses hanging from a tree outside Haven Middle School in Evanston on May 13, WGN-TV reported. Members from Ex Cons for Community and Social Change led the protest that served as a stand against racism and hatred.

After the nooses were discovered, District 65 Superintendent Dr. Devon Horton sent families a letter calling the act a racist hate crime. He also revealed that some students were seen chanting and carrying ropes over to where the nooses were found.

“This is a hate crime and a deliberate and specific incidence of an outwardly racist act,” Horton said.

“It resounds with a tone of hate and hurt that will impact members of our entire community, namely Black and African American students, staff, and families who have experienced generations of harm.”

The nooses came after students held staged sit-ins in response to staff changes. Students gathered outside or left school altogether. But after the sit-ins, parents noticed the nooses included personal letters in support of some of the teachers being transferred to other schools.

“What began as a peaceful protest by students is now tainted with hate and is part of a string of racist actions that continue to be directed at district and school administrators,” Horton said in his email.

The Evanston/Skokie School District 65 released a statement saying they are working with the police amid an investigation into how the nooses got there. But parents and community leaders are demanding transparency with the findings, Chicago Sun-Times reported.

“We need transparency now,” Tyrone Muhammad, executive director of Ex-Cons for Community and Social Change, said. “ … How can children learn in an environment where they feel like their lives are in danger?”

Muhammad is demanding that Evanston Mayor Daniel Bliss get involved in the investigation and an urgent investigation in wake of last weekend’s mass shooting in Buffalo, New York.

“Nooses hung from a…