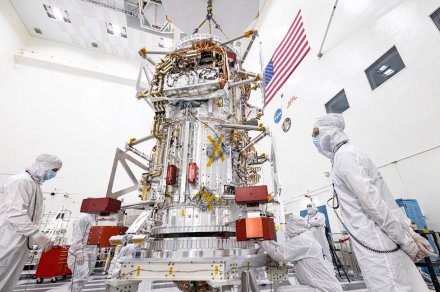 NASA’s Jet Propulsion Laboratory (JPL) in Southern California has taken delivery of a major piece of the Europa Clipper spacecraft ahead of its highly anticipated mission to Jupiter’s icy Europa moon in 2024.

JPL this week shared a time-lapse video (below) showing the main body of the Europa Clipper arriving at its facility from Johns Hopkins University Applied Physics Laboratory, which designed the spacecraft’s body in collaboration with JPL and NASA’s Goddard Space Flight Center.

One step closer to investigating the icy world Europa. ??

The main body of @NASA’s @EuropaClipper spacecraft has been delivered to JPL from @JHUAPL. It is undergoing final assembly and testing ahead of its planned 2024 launch to Jupiter’s icy moon. https://t.co/NpOsDbQl2Q pic.twitter.com/LYpgJ6BUSm

Commenting on the arrival of the component, Jordan Evans, the mission’s project manager at JPL, said: “It’s an exciting time for the whole project team and a huge milestone. This delivery brings us one step closer to launch and the Europa Clipper science investigation.”

The spacecraft is now undergoing final assembly and testing ahead of a space mission that will seek to learn more about Europa and find out if the liquid water that’s believed to exist beneath its icy crust has the potential to harbor life.

JPL says that with its solar arrays and other deployable equipment packed away for launch, the spacecraft will be “as large as an SUV.” However, once fully deployed, the spacecraft’s solar arrays will extend to the size of a basketball court, making it the largest NASA spacecraft ever built for a planetary mission.

Upon reaching its destination, the Europa Clipper will perform nearly 50 flybys of Jupiter’s Europa moon, which scientists believe contains an internal ocean holding twice as much water as all of Earth’s oceans.