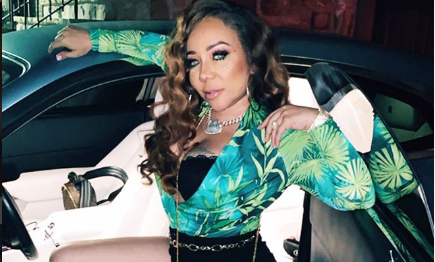 Tiny Harris recently revealed on Instagram that her son King Harris dedicated a song to her while performing onstage.

Although the Xscape singer didn’t disclose the exact date the event took place, she did, however, share the performance’s location at the State Farm Arena in Atlanta.

In the clip posted on June 16, King is seen hugging Tiny as an a cappella verse from Tupac’s 1995 track “Dear Mama” played in the background. In the lyrics played at the show, the late rapper acknowledged the struggles his mother, Afeni Shakur, endured raising children on her own and sympathized with her. The struggles included the family living in poverty and Afeni battling a drug addiction.

Further in the video, King, who was jamming along to the hit song, brought his mom back onstage although she tried to leave. The upload ended with the 17-year-old mouthing the words, “But the plan is to show you that I understand, you are appreciated.” In addition to the post, Tiny expressed in the caption that King’s surprise made her very emotional.

She wrote, “I love this boy @the_next_king10 so much. He’s a gentleman, he’s a hot head like his daddy. He’s my protector. He will give his last to any of his ppl. He surprised me with this one. I was trying to hold bck the tears. Cause I ain’t wit all that crying lol #KidSaiyan #StateFarmArena #MamasBaby”

As fans viewed the video, many brought up how inappropriate that song selection was because the lyrics didn’t resonate with the Harris’ lifestyle. One Instagram user even claimed that King could have repeatedly played the song’s hook.

“Tiny worked too hard for him to play that song for her,” SupaCent wrote.

“Wrong song choice for such a cute gesture.”

“Dedicating this song to HIS mom is kinda…