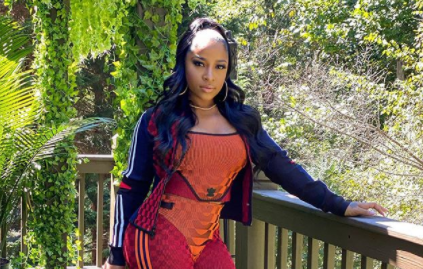 Toya Johnson had fans gushing over her looks after she posted three photos of herself in a two-piece pants set. Two out of three pictures were just of Toya by herself and, one photo featured her two girlfriends YouTuber Ami McClure and entrepreneur Lena Danielle.

The mom of two captioned her photos with a simple pink heart, and her comment section was filled with people pointing out her youthfulness.

“Literally the fountain of youth, you look like you’re in your twenties”

Fans also commented on the trio and how beautiful they all looked.

“My girls are so pretty”

Toya Johnson has made a name for herself in the industry. The 38-year-old entrepreneur wrote two books, one published in 2011, “Priceless Inspirations,” and the second released in 2017 with the title “You Just Don’t Get It.”

Aside from being an author, Toya is also best friends with Xscape member Tiny Harris. The two had their own reality TV series together, “Tiny and Toya,” which premiered on BET and became the highest rated series debut on BET in 2009. The series debut brought in over three million viewers.

Though the show only ran for two seasons, Toya was still booked and busy. In 2011 she had the opportunity to create her own show called “Toya: A Family Affair.”

The show premiered on BET as well and followed Toya as she went through life with her friends and family. The show also debuted Toya’s wedding journey and ceremony to music producer Mickey “Memphitz” Wright.

However, after one season the show was canceled, and in 2016 the Mr. and Mrs. went on “Marriage Boot Camp: Reality Stars” together to work on their marriage.

In 2020 it was released that Toya had filed for divorce from Memphitz due to “irreconcilable differences,” but the businesswoman did not let that situation turn her away from love.

After her separation from Memphitz, Toya…