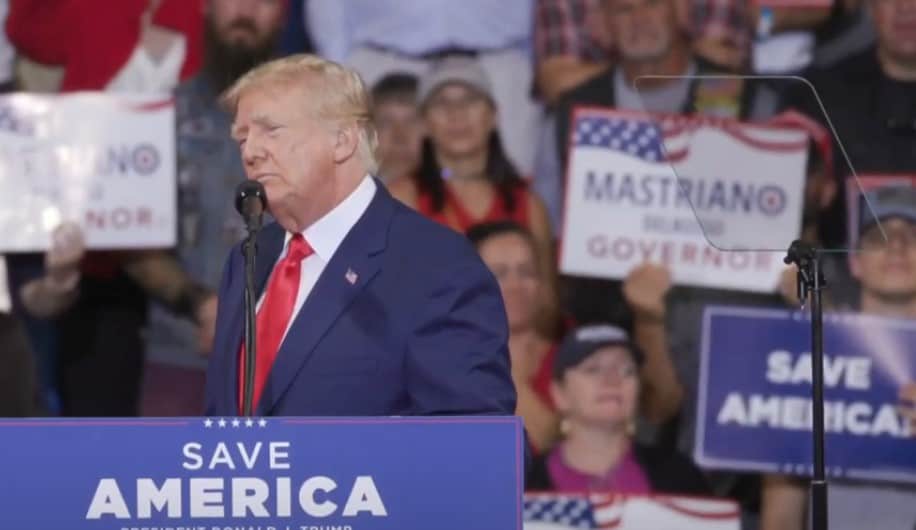 Trump Has A Wilkes-Barre Rally Meltdown Over FBI Search

Donald Trump melted down during his rally in Wilkes-Barre, PA, because the FBI touched his stuff and didn’t put things back.

Getting permission from a highly political magistrate, who they handpicked late in the evening, just days before the break-in, and trampled upon my rights and civil liberties, as if our country that we love so much. We’re a third-world nation. We’re like a third-world nation. Rifled through the first lady’s closet draws and everything else. And even did a deep and ugly search of the room of my 16-year-old son. Leaving everything they touched and far different conditions than it was when they started. Can you believe it?

The FBI and the Justice Department have become vicious monsters. Controlled by radical left scoundrels, lawyers, and the media, who tell them what to do you people right there and when to do it. They’re trying to silence me. And more importantly, they are trying to silence you, but we will not be silenced, right?

Trump said that the FBI riffled through the first lady’s closet, but the First Lady is Jill Biden, so why was the FBI in Jill Biden’s closet looking for classified documents?

Donald Trump has cooked up this fever dream of delusion that he thinks his supporters are going to become enraged by and rally around.

The fact is not a single Trump supporter has been arrested in relation to the classified documents that were found at Mar-a-Lago. The DOJ’s investigation of Trump has nothing to do with his supporters. The investigation is all about Donald Trump potentially breaking the law.

The rally has done nothing for Pennsylvania Republicans candidates as so far, Trump has spent the event doing his ranting and raving about his grievances, but this time, there is an added twist.

Donald Trump is trying to incite his supporters to scare the FBI out of indicting him, but the if the Wilkes-Barre meltdown was an indication, this tactic won’t work.

Mr. Easley is the managing editor. He is also a White House Press Pool and a Congressional correspondent for PoliticusUSA. Jason has a Bachelor’s Degree in Political Science….