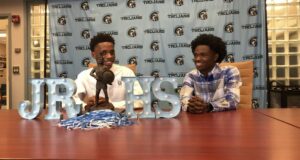 There were two Black male students who graduated at the top of their class, receiving the top honors at a school in Florida. Although the high school is overwhelmingly Black, it is the first time this has happened in more than 35 years.

The students’ names are Jeffrey Francis and Darrell Worrell.

Meet the top of the class at Ribault High! Jeffrey Francis (left) & Darrell Worrell (right) are valedictorian and salutatorian respectively. It’s the 1st time Ribault High has ever has the top 2 both be African-American young men. pic.twitter.com/5zfMURjpQX

“In elementary school, my sister graduated 8th in her class actually from here – Ribault High School,” Francis said. “From there, I kind of aspired to be No. 1.”

Francis has been named valedictorian.

“I seen that there weren’t many African-American men who were valedictorian. So I wondered how I could inspire other African American young men if I was valedictorian.”

“I wanted to get rid of a generational curse,” said Worrell, salutatorian. “You know, like a lot of my family, some of them didn’t graduate. Becoming salutatorian kind of more so fell in my lap,” Worrell said humbly. “I did work hard for it, of course, but it definitely was like, oh, I’m moving up in ranks.”

The two students are ready to join the college ranks when school is back in session in the fall.

Francis will be heading off to Florida A&M University (FAMU) and is looking forward to going into the medical field. While Worrell is going to Florida State University (FSU) as he plans to work in finance.