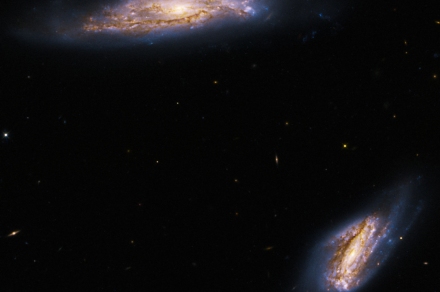 Two galaxies captured by Hubble are hotbed of star formation

This week’s image from the Hubble Space Telescope shows two galaxies that are a hotbed of star formation. The pair, known together as Arp 303 or individually as IC 563 on the bottom right and IC 564 on the top left, are located 275 million light-years away. They are in the dim constellation of Sextans, named after the astronomical instrument used to measure the position of stars.

The image below was captured by two Hubble instruments during two separate observations. The two observations were combined to show both visible light data and data from the infrared part of the spectrum.

“The second used Hubble’s Advanced Camera for Surveys (ACS) to take quick looks at bright, interesting galaxies across the sky. The observations filled gaps in Hubble’s archive and looked for promising candidates that Hubble, the James Webb Space Telescope, and other telescopes could study further.”

Stars are formed from clouds of dust and gas which float around in the cold space between stars. The cold temperatures cause the clouds to become clumpy, with a small amount of dust and gas coming together to create knots. Over time, more and more material is drawn to these knots due to gravity until eventually, the densest part of the cloud…