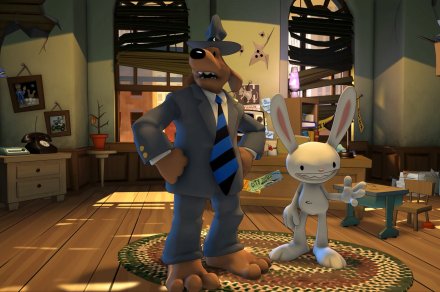 Two Sam & Max games are getting a PlayStation remaster

Skunkape Games, a small indie team comprised of some members of Telltale Games, has announced that the remastered versions of Sam & Max Save the World and Sam & Max: Beyond Time and Space will be released on the PlayStation on September 29.

Both games were originally released in 2006 and 2007 as Sam & Max Season One and Sam & Max Season Two, respectively. The project was developed by Telltale Games, who adapted them from the comic book series created by Steve Purcell. When Telltale shut down in 2018, Skunkape bought the rights to the Sam & Max series and remastered them for Nintendo Switch, PC (via Steam), and Xbox One in 2020 and 2021 with Purcell’s blessing. Today, it released a trailer confirming the PS4 port of the remasters of the adventures of the crime-fighting dog and rabbit duo.

In Sam & Max Save the World, the Freelance Police solve a strange case of former child stars causing mayhem in the city after getting hypnotized by a mysterious entity. In Sam & Max: Beyond Time and Space, the situation gets even weirder when the duo faces everything from an emo vampire to a robot trashing their street to a showdown with Santa Claus.

Each game comes packed with six episodes of outrageous comedy and has been updated with improved lip-syncing, enhanced graphics, dynamic lighting, a new user interface, a 16:9 aspect ratio, and higher resolution support. There’s also new voice acting, re-encoded audio, new camera sequences, and updated character models to better match the characters in Purcell’s comics and make the games “look beautiful and play smoothly on PS4 and PS5,” according to Skunkape.