BREAKING NEWS
GMT-4 06:06
Home Economics Tyler Perry Talks About Actors Who Back Out of His Projects: ‘Too Bad, So Sad for Them’ 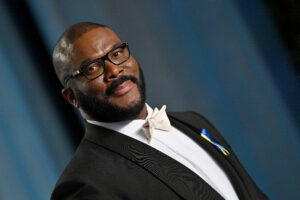 Tyler Perry Talks About Actors Who Back Out of His Projects: ‘Too Bad, So Sad for Them’

Tyler Perry is a certified billionaire who owns a studio and has made blockbuster hits, but some actors are still hesitant to work with the multitalented entertainer, according to People.

Perry got candid on the “PEOPLE Every Day” podcast with host Janine Rubenstein when he spoke about his latest project, A Jazzman’s Blues, a coming-of-age drama inspired by one of his favorite playwrights, August Wilson.

“I’m beyond excited about it,” Perry said about the film due out on Netflix on Sept. 23.

“It’s something very, very different for me. And, so far, the reception of it has been incredible.”

The 52-year-old film director, producer, and writer, first took a crack at the screenplay in 1995 when he was on his last dime, fighting to debut his first stage play.

The story for Blues developed when he slid into a theater to watch one of Wilson’s plays in Atlanta and had the opportunity to meet the renowned playwright, according to People.

Perry, an entertainment mogul, has launched the careers of many well-known actors like Idris Elba and Tessa Thompson.

However, when assembling the cast for his latest films, many up-and-coming actors hesitated to sign on to work with him.

“Unfortunately, with this film, I went to a bunch of up-and-coming young artists who were getting a lot of attention, and I asked them about doing the role. They read the script, they loved the script, but I think there was a reservation or hesitation about working with me in particular on this film because I guess they didn’t know how it would turn out.”

But Perry brushes the disappointment off his shoulders, “Too bad, so sad for them,” and teases that the finished product surpassed his initial vision, People reports.

“A lot of times, these teams don’t necessarily understand the power of my audience and what I bring. The people who are in [A Jazzman’s Blues] made it exactly what it was supposed to be,” he says.

“It’s better than I ever thought it would be, but it’s always been very important to me to break new faces. And that has opened the door for me to be able to help so many people.”

Critics and his colleagues in the industry have…