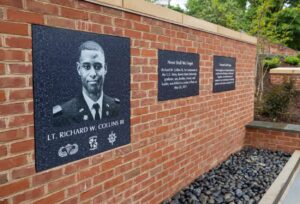 Posted By: adminon: May 19, 2022In: EconomicsNo Comments
Print Email

The University of Maryland (UMD) has honored Lieutenant Richard Collins III, the soon-to-graduate Bowie State University student who was killed in an act of racism by a white man in 2017.

UMD dedicated a plaque and plaza at a ceremony earlier this week for the Lt. Richard Collins III Plaza. Hundreds of university members attended along with social justice activists, community leaders, government officials, and family and friends of Collins.

The memorial also helped advance important discussions on social justice and equity for all.

“Today, along with the spaces, statues, halls, and programs that bear their names, we are adding a new name that will spark the inspiration needed to fight for social justice: Lt. Richard W. Collins III. This is a name—a legacy  that will mean something to every person who sets foot on our campus.”

Coming up on 5 years since Army 1st Lt Richard Collins III — days away from graduating from Bowie State Univ — was killed at this bus stop on campus of University of Maryland. The white man who killed him has been convicted of murder, and sentenced to life in prison. pic.twitter.com/05KWtnUTzd

First Lt. Richard Collins, a Black man, was stabbed by a white man, who has been sentenced to life in prison. At the groundbreaking in March, University Pres Pines said the school will continue to honor Collins, “as we pursue an anti-racist, inclusive culture.” pic.twitter.com/gZNDfLrUx2

“His young life exemplified all that [was] good and hopeful in a world that too often dismisses the sanctity of human life itself,” Richard Collins said.

“It is my desire that we all take with us the spirit of adding daily to the stock of our moral courage.”

Dawn Collins directed her comment to her deceased son: