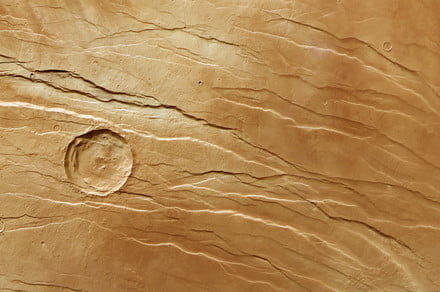 Posted By: adminon: May 15, 2022In: TechnologyNo Comments
Print Email

While rovers visiting the surface of Mars are invaluable research tools for understanding surface chemistry and other questions, observing Mars from orbit can help us understand the planet’s history — as recent images of a martian impact crater show.

The Mars Express orbiter uses its High Resolution Stereo Camera (HRSC) instrument to take photographs of the Martian surface, including geographical features and locations of water ice. Recently, ESA has shared images created from HRSC data of deep gouges on the surface of the Tantalus Fossae region. These troughs are part of a fault system that stretches nearly 1,500 miles across and are located around the edges of a low-lying volcano called Alba Mons.

“The fossae were created as the summit of Alba Mons rose in elevation, causing the surrounding surface to become warped, extended, and broken,” ESA explains. “The Tantalus Fossae faults are a great example of a surface feature known as grabens; each trench formed as two parallel faults opened up, causing the rock between to drop down into the resulting void.”

This oblique perspective view of Tantalus Fossae on Mars was generated from the digital terrain model and the nadir and color channels of the High Resolution Stereo Camera on ESA’s Mars Express. ESA/DLR/FU Berlin

Another image shows the same region but from a different angle, as generated from digital information collected by the HRSC instrument and others. By bringing together information about elevation and surface features from different instruments, digital terrain models can be generated that show what the terrain looks like in three dimensions.

The large crater shown in the images can be helpful in dating the grabens features. The crater would have been caused when a chunk of rock or ice came streaming through the thin atmosphere and hit the planet, throwing up debris and creating a shock wave that forms a…