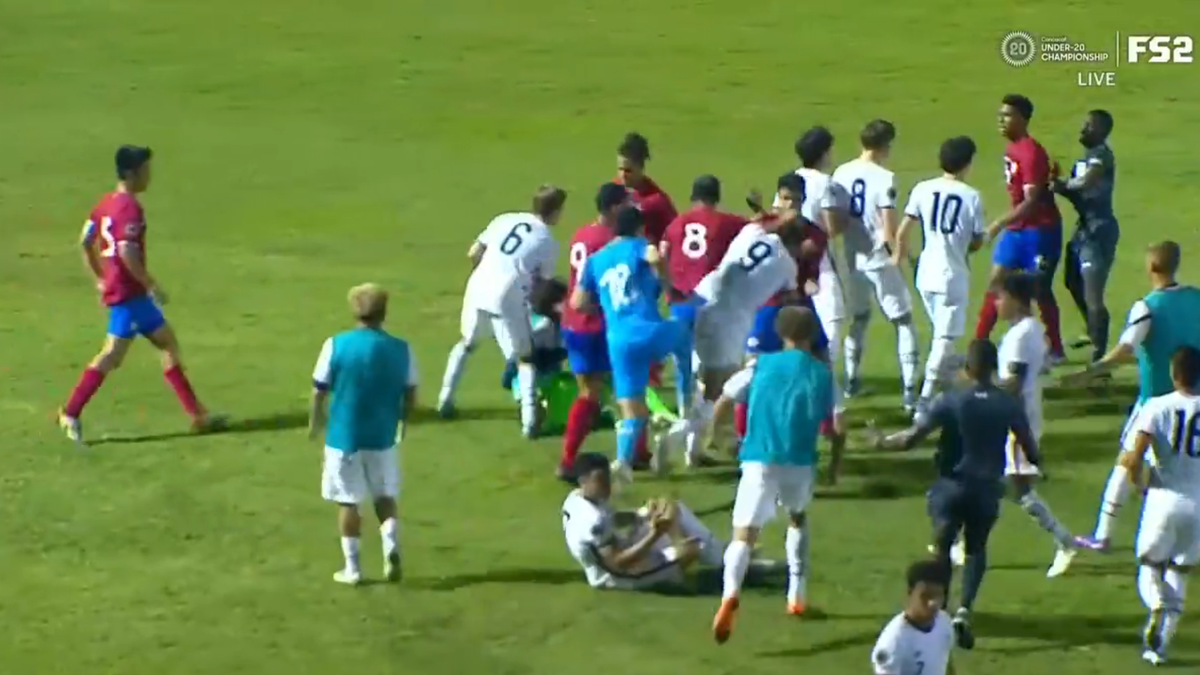 The USMNT and Costa Rican U-20 mens teams brawl after the final whistle on Tuesday.Screenshot: FS2

The United States men’s national under-20 soccer team’s initial celebration for qualifying to the 2023 FIFA U-20 World Cup lasted all of five seconds. They got into a fight with Costa Rica. The American’s CONCACAF U-20 Championship quater-final was heated throughout, with plenty of those mass confrontations FIFA likes to have opponents avoid.

The pushing and shoving reached a tipping point after the final whistle of the USA’s 2-0 victory. American forward Cade Cowell is seen waving goodbye to a Costa Rican player, due to Los Ticos missing the U-20 World Cup. Cowell is charged by the incensed player, starting a melee between the teams.

The Fox Sports cameras show the opening moments of the post-game confrontation, before quickly cutting to other celebrations. A few seconds later, every player from both teams and CONCACAF officials are involved. Back in the area where the chaos began, US midfielder Niko Tsakiris is down on the pitch looking confused. Several smaller skirmishes break out from there.

More kicks, with studded cleats on, can be seen thrown by players than punches, most instigated by the eliminated Costa Ricans. The whole dust-up lasted less than a minute and no one appeared to be hurt from the fight. No supplemental disciplinary action has been announced by CONCACAF or US Soccer. Then again, neither organization has released a statement about the extracurriculars. I guess that post-game “passion” is ok’ed by CONCACAF, with important games becoming more contentious by the year?

The game aired on FS2 and didn’t impact the United States senior national team’s status for the World Cup in Qatar. And the near-brawl has had next-to-no publicity. This isn’t a sweep-it-under-the-rug scenario. Someone could’ve been seriously hurt and it’s a minor miracle no one was. As Deadspin’s Carron Phillips wrote yesterday, athletes who play outside the confines of the NBA and NFL too frequently get a pass for their on-field fights, while those who brawl in predominantly Black sports get labeled…