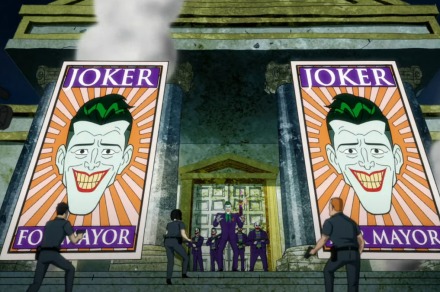 In DC’s comic book universe, The Joker once ran for office with a simple campaign slogan: “Vote for me or I’ll kill you.” It’s an oddly compelling argument, in its own way. Now, one of The Joker’s animated counterparts is also running for office in the new season of Harley Quinn on HBO Max. And as you can see in the trailer below, Joker has his sights set on becoming Gotham City’s next mayor.

Impossible? Not in this country! Joker is running on a family values campaign that he may actually believe in. For viewers who need a refresher, Joker found the love of his life in season 2, and it wasn’t Harley; it was just an ordinary nurse and single mother named Bethany. Joker truly seems to love Bethany and her kids — he’s just not going to let that stop him from being the Clown Prince of Crime.

Meanwhile, Harley and Ivy are back in town as a full-fledged couple, and they’ve got their own designs for the future of Gotham. In deference to her new girlfriend, Harley is all on board with Ivy’s desire to create a green new Gotham. And if that flies in the face of Joker or even Batman himself, so be it.

There is also some tension between Harley and Ivy in the trailer, as their own plans run into roadblocks. Ivy isn’t thrilled about Harley’s aggressive tactics, and Harley appears to be taken aback by the number of lives it will cost to give Ivy her slice of paradise in Gotham City. Can their relationship withstand this test of wills?

The first three episodes of Harley Quinn season 3 will premiere on HBO Max on July 28. After that, new episodes will premiere weekly through mid-September.