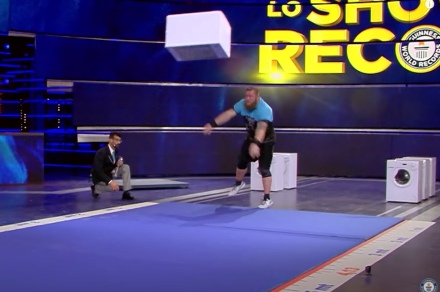 “All the washing machines were harmed in the making of this record,” Guinness World Records proclaims in what must surely itself be a contender for The World’s Most Ridiculous Record.

You see, it involves hurling a washing machine as far as possible. And that’s it.

For those who love washing machines, or who simply shudder at the mere thought of perfectly decent technology getting smashed to bits, the video below will be a hard watch.

But if you’re curious to find out just how far someone can lob a contraption that ordinarily should live quietly in your home while performing occasional garment-cleaning duties, then dive right in.

The footage is from Italy’s Lo Show Dei Record (“The Show of Records”), which took place in Milan earlier this year. Guinness World Records shared the video this week.

With Guinness World Records officials in attendance, the pair set about hurling through the air three washing machines each weighing 101.4 pounds (46 kilograms).

They ultimate goal was to beat the existing world record for the longest throw of a washing machine, which stood at 13 feet 6.6 inches (4.13 meters).

And Espenkrona achieved just that, winning the showdown with a throw of 14 feet 7.2 inches (4.45 meters) and earning a new Guinness World Record. Albeit a bit of a silly one.

The athletes’ technique suggests that if you ever find yourself having to pick up and fling a washing machine through the air (tip: remove all garments and water first), the best way to do it is to first balance it on your head before taking a short run up to launch it forward. Though it’s probably harder than it looks.

Up for another absurd record? Then check out this video featuring some crazy parallel parking stunts.