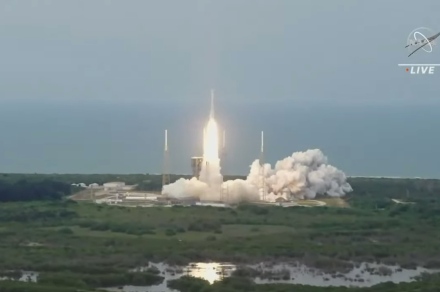 The landing marked the end of a successful uncrewed mission to the International Space Station (ISS) and came nearly 18 months after its first test flight ended in failure.

Celebrating the safe homecoming of its spacecraft after five days in orbit, Boeing shared a short video (below) capturing the key moments from the OFT-2 mission.

On May 19, #Starliner&#39;s launch began #OFT2. After 5 days docked to @Space_Station, Starliner landed safely on May 25. This test gave Expedition 67, @NASA and our teams vital data and cargo for future commercial space exploration. See the mission from launch to landing. pic.twitter.com/gKvJU6K0lg

The 240-second video includes highlights such as the Starliner’s launch from Cape Canaveral in Florida aboard a ULA Atlas V rocket, the spacecraft’s ISS docking and departure, and its journey home. We also get a glimpse of Rosie, the sensor-laden mannequin that flew aboard the Starliner to help engineers learn more about the conditions inside the capsule during spaceflight, at the 72-second mark.

“We have had an excellent flight test of a complex system that we expected to learn from along the way and we have,” said Mark Nappi, vice president and program manager of the Boeing Commercial Crew Program. “Thank you to the NASA and Boeing teammates who have put so much of themselves into Starliner.”

The mission was designed to demonstrate the quality and performance of Boeing’s transportation system and should pave the way for Starliner’s first crewed test flight toward the end of this year.

Once fully certified, NASA will be able to use the Starliner alongside SpaceX’s Crew Dragon capsule for astronaut flights to and from the ISS.

Boeing’s first attempt to send the Starliner to the ISS ended in failure in 2019 when the spacecraft was unable to hit the correct orbit. The failed mission was put down to a slew of software issues that Boeing and NASA worked on to…