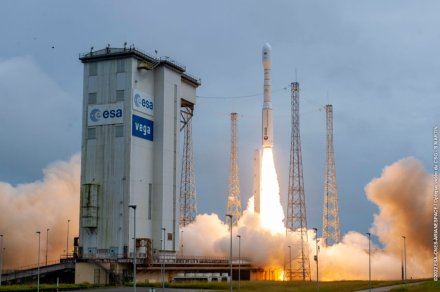 Watch highlights of the first launch of new European rocket

The European Space Agency launched a new rocket for the first time this week, with the inaugural mission of the Vega-C. This medium-sized rocket is used for delivering payloads like satellites into orbit, and for its first mission it carried a total of almost 500kg consisting of one large satellite and six small CubeSats.

Vega-C lifted off from Europe’s Spaceport in French Guiana as part of a European Space Agency (ESA) mission called Flight VV21. Liftoff occurred at 9:13 a.m. ET (6:13 a.m. PT) on Wednesday, July 12. The rocket took two hours and 15 minutes to release its lat payload, and you can see highlights of the mission in the video above or on ESA’s YouTube channel.

The new rocket is an upgrade to ESA’s older Vega rocket which is now a decade old. “Vega-C represents a dramatic capability boost compared to Vega, which has flown since 2012,” ESA writes. “With new first and second stages and an uprated fourth stage, Vega-C increases performance from Vega’s 1.5 t to about 2.3 t in a reference 700 km polar orbit.”

Vega-C is larger than Vega at nearly 30 meters in height compared to Vega’s 25 meters, and it also has a bigger fairing or nose cone. This means there is more room inside the rocket for carrying payloads — in this case, it means Vega-C can carry twice the payload volume of Vega. The aim is for the rocket to be able to deploy either two main payloads or a selection of smaller payloads as part of a rideshare program.

Develpment will continue on the Vega model with a planned variant called Vega-E, set for debut in 2026 which will use a new cryogenic upper stage in place of Vega-C’s third and fourth stages.

The larger satellite deployed from Vega-C this week was called LARES-2, and is a research satellite from the Italian Space Agency for investigating a phenomenon related to distortions of spacetime called the frame-dragging effect. The other six small CubeSats were research projects from various European countries including research into growing plants in…