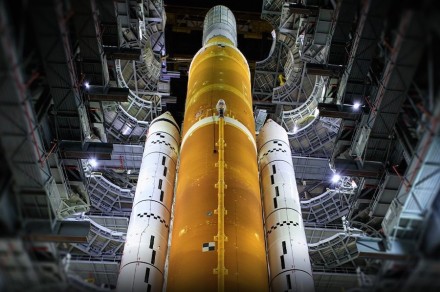 In the same week that NASA announced targeted dates for the maiden launch of its mega moon rocket, the agency has dropped a cinematic trailer (below) to spread the word about the mission.

Scheduled to take place as early as August 29, the much-anticipated Artemis I mission will usher in a new era of human space exploration that will involve returning astronauts to the lunar surface after a 50-year absence. NASA’s Artemis program is also aiming to establish a sustainable human presence on the moon and use it as stepping stone for the first crewed mission to Mars.

Short and sweet, NASA’s Artemis: Launching to the Moon trailer depicts the powerful Space Launch System (SLS) rocket launching the Orion capsule to space. Artemis I will involve sending the Orion on a flyby of the moon before bringing the spacecraft home.

“Artemis I will be the first integrated test of NASA’s deep space exploration systems: the Orion spacecraft, SLS rocket, and the ground systems at Kennedy Space Center in Cape Canaveral, Florida,” NASA says in notes accompanying the video. “The first in a series of increasingly complex missions, Artemis I will be an uncrewed flight test that will provide a foundation for human deep space exploration, and demonstrate our commitment and capability to extend human existence to the moon and beyond.”

The long-awaited Artemis I mission will see Orion fly further than any spacecraft built for humans has ever flown, with the capsule set to travel 280,000 miles from Earth and thousands of miles beyond the moon during a mission that will last up to six weeks.

“Orion will stay in space longer than any ship for astronauts has done without docking to a space station and return home faster and hotter than ever before,” NASA said.

If the SLS rocket and Orion spacecraft perform as expected during the Artemis I mission, then Artemis II, currently set for 2024, will fly the same route but with astronauts on board. A successful crewed flight will pave the way for Artemis III, possibly in 2025, which will put the first woman and first person of color on the lunar surface.

And then, while working…