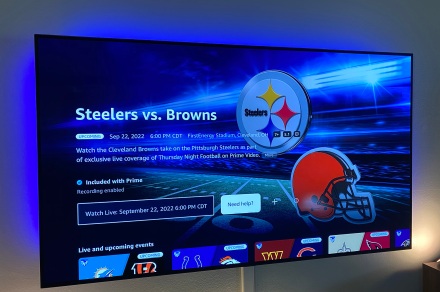 Thursday Night Football — that is, the Thursday night NFL games — are now on Amazon Prime Video, and only streaming on Prime Video. That’s true when the Pittsburgh Steelers head to Cleveland to play the Browns on September 22 to open Week 3. It’ll be a short week for both teams, with the AFC rivals having each played games just five days prior.

The big thing to remember about this one? You can (mostly) only watch the Steelers and Browns on Amazon Prime Video. That is, you’ll have to stream the game via the Prime Video app. It’s not a huge deal, as Amazon is pretty good at this sort of thing. It’s just that the game isn’t in the traditional spots anymore.

That’s great for those who already have an Amazon Prime subscription, which is required to watch the game. If you don’t have a subscription to Amazon Prime, you’ll need to get one. Sort of. The game also will be available on Twitch (which Amazon owns), as well as on NFL+. And broadcast affiliates in both Pittsburgh and Cleveland should have the game on, too. But for everyone else? It’s all about the NFL on Prime Video.

Thursday’s game will be the second division test for the Steelers, who edged out Cincinnati in a wild Week 1 finish that came down to a field goal in the final seconds after both teams struggled with their kicking game. This is Cleveland’s first AFC North match.

On Sunday, September 18, the Steelers face the New England Patriots, and the Browns play host to the New York Jets.

The Amazon Prime Video app is available on every major streaming platform, including Roku, Amazon Fire TV, Apple TV, Android TV, Chromecast with Google TV, on iOS and Android devices, on gaming consoles, on various smart TVs, and in a web browser.