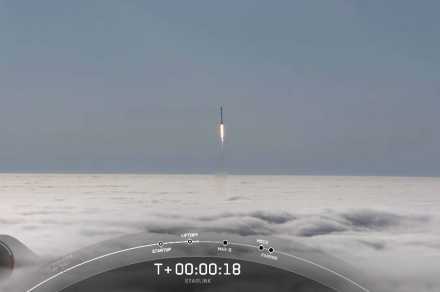 Watch SpaceX rocket soar above the clouds in latest launch

The spaceflight company’s workhorse Falcon 9 rocket lifted off from a Space Launch Complex 4 East (SLC-4E) at Vandenberg Space Force Base in California at 6:30 p.m. PT.

As usual, SpaceX livestreamed the early stages of the mission, and also posted key sequences on its Twitter account. It was foggy at the launch site, but the livestream quickly revealed a beautiful scene as the rocket soared above a thick blanket of cloud.

About 100 seconds into the flight, we can see the rocket at full power as it heads to orbit:

Around 150 seconds into Sunday’s mission, we get confirmation of main engine cutoff and stage separation, indicating the beginning of the first stage’s return to Earth. A few seconds later, we see the rocket’s fairing halves fall away, exposing the satellites to space for the first time, just ahead of their deployment.

This particular first-stage Falcon 9 booster was on its fifth flight, having previously supported the Sentinel-6 Michael Freilich and DART missions, as well as three Starlink missions.

Following stage separation, Falcon 9’s first stage returned to Earth, performing a perfect landing on the Of Course I Still Love You drone ship waiting in the Pacific Ocean off the coast of California. Frustratingly, the livestream failed just as the rocket touched down.

Falcon 9 rockets have now been launched 166 times since June 2010, with 164 of the missions deemed a success. Besides delivering Starlink satellites to orbit, the rocket also sends satellites to space for private companies and organizations, and also powers astronauts and cargo toward the International Space Station.

For those not in the know, Starlink is an internet service that uses satellites to enable broadband connectivity for folks with the appropriate receiving equipment. SpaceX has now deployed…