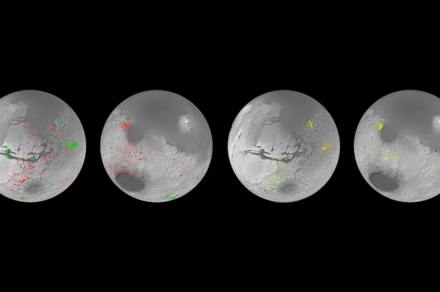 Water map of Mars could help choose locations for missions

Whether you’re thinking about the future of Mars and how to send humans there, or trying to understand its past and see how the planet became the way it is today, one particular feature is crucially important: water. Scientists know that there was once abundant water on Mars, but over time this evaporated away and left the planet a dry husk, with little to no liquid water on its surface today. But that water has left indications in the geology of the planet, and now the European Space Agency (ESA) has shared a water map of Mars that traces the planet’s history and points to potential resources for future missions.

The map uses data collected by two different Mars orbiters, ESA’s Mars Express and NASA’s Mars Reconnaissance Orbiter. Spectrometers on each of the orbiters have been collecting information on the location of what is called aqueous minerals, meaning rocks that have interacted with water in the past and which have formed minerals such as clays.

The map shows not only the locations of these minerals but also how abundant they are. And one of the biggest findings is that these minerals aren’t rare — in fact, there are hundreds of thousands of patches of minerals across the planet.

“This work has now established that when you are studying the ancient terrains in detail, not seeing these minerals is actually the oddity,” one of the researchers, John Carter, said in a statement.

This map is useful for assessing potential landing sites for future missions, whether crewed or robotic. Human crews will need to access water for a long-term Mars mission, and one way to do that is to bake aqueous minerals to…