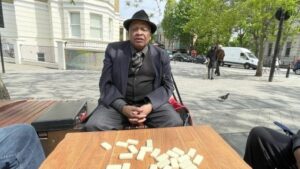 A group of primarily Black pensioners who enjoy their free time by playing dominoes in London Square are speaking out against a new noise ban they feel discriminates against them.

The Guardian reports that Ernest Theophile, 73, is among the group of retirees who take to the square about seven days a week to gather and socialize over games of dominoes and cards.

But last year, Theophile was summoned to court by the Westminster Council and was accused of being too loud and causing a disturbance.

As a result, the council implemented a special injunction that banned social gatherings. While the injunction was eventually overturned, a court order was put in place that could land Theophile and his friends in jail if accused of “playing loud amplified music, drinking alcohol and shouting and swearing.”

But Theophile says no drinking and swearing occurs when he and his friends gather at Maida Hill market.

“The loneliness was one of the biggest factors as to why we gathered there. That’s why the square was ideal for us,” Theophile said.

“Sometimes the younger generation come here and congregate, but we just want a place where we can socialize and play a few games to pass the time.”

Tony Edwards, who is in his 60s, shares Theophile’s sentiments and says the domino players don’t create violent environments.

“I’m here all the time, seven days a week,” Edwards said. “All we do here is play a little cards, a little dominoes. That’s all we do; we don’t trouble anybody. We’re peaceful; we’re a family.”

The complaints are centered around the game of dominos, which is considered a joyous pastime in Caribbean cultures. Now, Theophile has lawyered up to combat the order he and his legal team say is representative of racial “discrimination,” Metro reports.

Lawyer Tim James-Matthews says the order “is likely to be indirectly discriminatory.”

“Although apparently “neutral” in application, the majority of those whose behavior is constrained by force of the injunction, share a protected characteristic: race,’ James-Matthews sain in Central London county court.